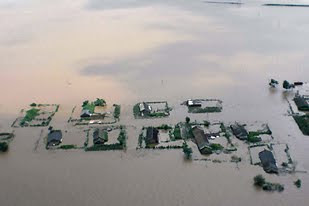 The floods�have caused four deaths in China so far and forced thousands of people in neighbouring North Korea to relocate.

China's state media said 94,000 people were evacuated from Dandong alone after heavy rain caused the Yalu river to breach its banks, flooding low-lying parts of the northern city."
at 8:28 AM No comments:

MANILA (AFP) – Climate change may be playing a part in record rains ravaging Asia but environment experts say the destruction of ecosystems is more directly to blame for the severity of killer floods.

Widespread deforestation, the conversion of wetlands to farms or urban sprawl and the clogging up of natural drainage systems with garbage are just some of the factors exacerbating the impacts of the floods, they say.... Yahoo!News