UN warns 'unplanned urban expansion' to cause more floods - The Philippine Star » News » Headlines: "She said governments, countries and communities should be alarmed by the increasing flood risk and frequency of massive flooding and that measures to address them are ineffective.

The Philippines has seen three recent catastrophic floods - first in 2009 when tropical storm Ondoy dumped half a month's rain fell on Metro Manila in 24 hours; typhoon Sendong which led to floods that killed more than 400 people in Mindanao; and the recent monsoon rains that caused landslides and deep floods in many parts of Luzon."

It's climate change, people, we have to get rid of the cars! 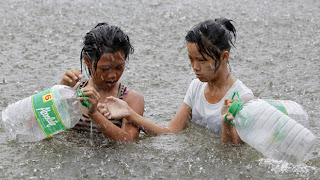 Residents wade on a flooded street during a heavy downpour in the Philippines, where Typhoon Saola has killed 14 people. (Erik De Castro/Reuters

Typhoon Saola, which killed at least 14 people in the Philippines, has already been blamed for four deaths in Taiwan, with the toll expected to rise."